Metabedu Incremental Change
Ways to change yourself, then your community and neighborhood, then the world.

A fundamental concept at Metabedu is changing things through the changes you make in yourself.  When you are educated about where one can become empowered, you may choose to become empowered and then, action and empowerment are one and the same.

Many times we belong to well meaning groups centered on changing some action like fracking, on some issue, such as who gets taxed how much or some societal malady such as homelessness.  Seems like a good idea at the time, but, is it a good idea for us to be involved, for our own spiritual strengthening?  Theoretically, if it isn't your spiritual thing, so to speak, it doesn't mean don't do it.  However, look forward to a nagging feeling you belong somewhere else or look forward to burnout or to a lack of enthusiam.  Lerners when to cut bait.

Many issues exist because often people allow themselves to not act on their inner spirit.  Some would say they are part of the problem if not part of the solution.
There are pages upon pages of websites about changing and listening.
I would like to challenge you to listen to yourself, the inner being and make decisions toward change, some incremental some perhaps more radical.

What is it you find fruitless that you participate in? Well, don't be tied to it.  Maybe your involvement is just for a season.  At the same time what is it that feeds your soul that you can reinforce?
I once caught myself tsk tsk tsking the grounds around a local middle school as I entered.   Always litter "everywhere."  I decided, I was part of the problem and could be part of the solution.  Now I pick up a piece of trash or two when entering places; just a piece or two and not every time. It changed my outlook and added to my empowerment.
Incremental change is not ever carried out in a vacuum.  We may not see the ripple but there are ripples within one's self and many times if not always externally. 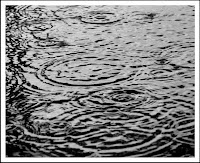 A few days later at the same school I saw a child’s glove on the ground.  Globally, one more pair of gloves goes into production and all of the resources in making, distributing and marketing those gloves are used.
I got out of my car, picked up the glove and hailed two students walking into the school; “are yall going into the school,” “ yes,” they replied.  “Will you take this glove to the lost and found?” they looked at me like I was a nut and took the glove.

Apparently they walked some distance away and threw the glove back on the ground, I saw it the next day.  Now two ripples are set in motion.  The first was more internal congruency for me by repositioning my actions more inline with my values.  The second ripple was two young people being confronted with a value apparently not their own and making a decision.  How many confrontations before they take the glove to the lost and found?  They may never, in fact it could have the opposite reaction.  However, maybe next time they are honest explaining that it is too much trouble and they are late for the basketball game and tell me where the lost and found is or; Maybe they will endure a twinge of guilt talking to a gloveless classmate whose parents couldn’t buy another pair. They could have an epiphany about our connectedness.  To be clear this is not about picking up trash and replenishing the lost and found it's about little moments of incremental change toward my authentic self.

I told a colleague about my zeal for picking up trash, it’s not that I’ve not done it before, but now I looked at what prevented me from doing it on so many occasions.  My colleague suggested having a box of those surgical gloves on hand, cause ya never know what you are touching, something to consider.
You may be wondering what was going through my mind when I picked up the glove on the next day.  I didn’t pick it.  I’m working on me too family.

Use Incremental Change - Pick the Brain

The Power of Incremental Change Over Time | Michael Hyatt

Posted by Metabedu Connects at 2:40 PM

Part of the trouble is "it's not my thing" - maybe the biggest block to change, incremental or otherwise. That glove isn't mine, and I don't know how it got there, so I'm not doing anything about it. I didn't put that trash there, whoever's responsible for it needs to do something about it. I have to go to work, I have to get home, I have to go to this appointment....and then on the larger scale, if somebody down the street from me gets robbed, or somebody I don't know gets attacked - it's not my thing. Maybe I have some empathy, but I don't get involved.

I find myself doing that all the time, and it's honestly embarrassing. Only way to change it? Incrementally-